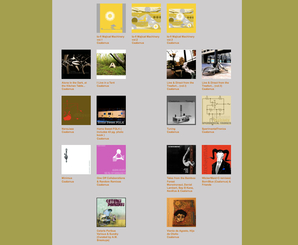 
I'll be releasing my first full length album on New Years Day '14. All of the works I have posted currently are e.p.s. I don't think there is anything over an hour total running time. Some of them are close though.


The second & third full length releases are currently in process & I've got nearly enough material STARTED...may take a decade to actually finish, but we can dream yeah? :P
SoundCloud.com/Caalamus 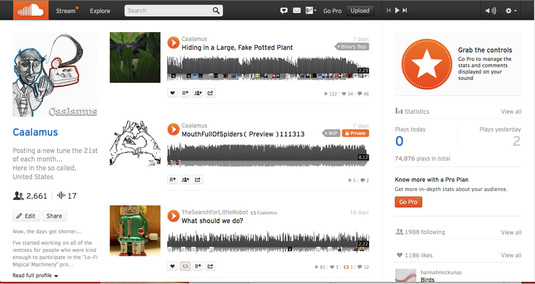 This link will lead you to my personal SoundCLoud page...


Ever since SoundCloud decided to throw out a perfectly functional format, in favor of a crowded, confusing, wonky, apparently pricey "new" version... well, let's just say I'm not quite as enthusiastic.


I deleted all of my content & no longer pay for a "pro" account, but I've started by uploading again. I'm still there quite often & in fact, I post a tune the 21st of every month. First came promo mixes for all of the stuff already released on BandCamp. Now I'm uploading new material.
YouTube.com/CaalamusTube 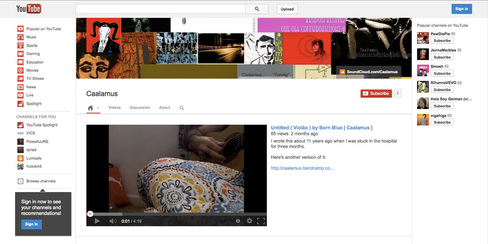 Here's my YouTube page. I'm just starting to work on it as of November 2013. We'll see if anything develops. There's currently 13 videos posted. I had designs on doing "music videos" for all of my releases, but I'm questioning how realistic that is!


In any case, there's some visuals to accompany the tunes. I've got a little Canon which shoots pretty nifty HD. I don't get out recording video as much as I'd like, but there will be more posts.

I guess this Flickr more or less speaks for it'self. There's Walls, there's Freights & then you're on probation for three years.

I had a pretty good run though. 20 years, 4 countries, lots of good times. Some bad ones too. Kept me busy though. Whatever.

I've got my fingers in various other pies as well: 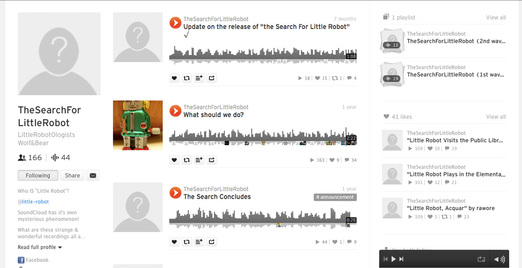 ...this is a project I started with a Wolf from Sverige (soundcloud.com/ohsowhy).

We found the most mysterious SoundClouder...
SoundCloud.com/Little-Robot

Little Robot was diligently posting "Robot_Whistles", without any followers, not following anyone... just

...so we decided to investigate. Well, we followed Little Robot & introduced others to this enigmatic character.

Eventually, it was decided we would try to make contact. The only logical approach, was to try communicating with the Robot in it's own strange mode, by "Whistling" over field recordings of populated environments. Thus began an effort which rapidly snowballed into a multi-year campaign, involving many curious collaborators.

The methodology evolved ...& what started as an attempt to replicate the Robot's postings, turned into various unique forms of SoundArt... some of which bore little resemblance to those communiques originating with our bewildering Bot!

Time passed & our page filled with over 40 submissions! But there wasn't a peep from the object of our fascination! No indication that the Automaton was even aware of us. Some participants actually posted comments on the the original Little Robot uploads! Sadly, the Robot eventually started posting Whistles with odd, distorted bits... painful to the ear even. I began to suspect that our presence was indeed being noticed & worried that it was in fact, unwelcome :[

Next came the empty uploads, just silence. Wave forms that looked as if they would deafen you. Solid blocks!
But in reality, there was no audible information present. It became apparent that, like any enthusiastic
"anthropologists" eventually do ...we had influenced our subject!
https://soundcloud.com/little-robot/1274052-1

Shortly thereafter, the elusive Robot disappeared entirely! Who knows what happened! Perhaps this is exactly what the Robot wanted? Or what if the Robot Whistles were some sort of code. Like modern day Number Stations! It's likely that we shall never know!

But, on a positive note... two friends got together for an interesting & eventually quite popular project... which served to facilitate many more interactions, as well as some most unique Sound Artifacts!

It looks like we'll be releasing it on BandCamp soon, thanks to dhaturarecords.bandcamp.com (curated by soundcloud.com/ullapul). I just have to finish the layout of the liner notes. I've received contributions from a few very talented Artists, including a really NICE cover! I'll keep you posted!

Ceteris Paribus was put together by A.M. Breakups with art by Thousand Styles


You could always just Google:

"Caalamus"
(...make sure you get the spelling correct :P )

Thanks for dropping by√
Back to Top...